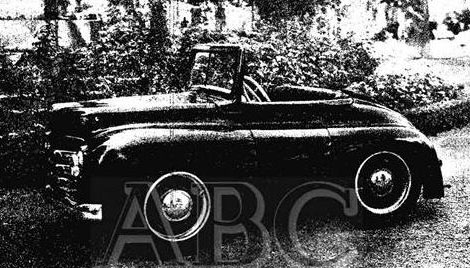 The Abril is one of many microcars manufactured in Spain. This was a unique vehicle, which existed at a time when Spain was mired in misery and raw materials were conspicuous by their absence.

Actually, this advertising article, intended to publicize a small 12 hp diesel engine manufactured by “Motores Abril”, a company owned by José Abril Álvarez, located in the Alameda de Capuchinos of the city of Murcia, dedicated mainly to the manufacture of industrial engines.

The theoretical article was constructed as an interview, in which the journalist Faustino De Angel asked Miguel Molina a series of questions, who at that time was the representative for the “Central Region” of the “Motores Abril” company. Diesel engine has 4 cylinders of 60 millimeters in diameter and 80 mm stroke. It is also stated in the article that there is a patent for the invention.

José Abril Álvarez, who already in 1941 had applied for the patent for a gas generator in the company of Ginés José Viudes Vivanco, presented a series of patents between 1946 and 1951, related to “improvements in the heavy oil engines”,”improvement in internal combustion engines”,”a new suspension for vehicles” and a “new car”.

It is assumed that for the presentation of the engine, “Motores Abril” handcrafted a frame and bodywork in its workshops to “dress” its motorized vehicle engine. That fact is what gives meaning to the last two patents mentioned.

Mr. Molina further describes the characteristics of the “car”: