Home » Articles » Fiat 500, But Not Quite: The Catamaran From The Italian Studio Lazzarini Design

The Italian design studio Lazzarini Design, known for its non-standard solutions in the field of shipbuilding, has launched a new brand Floating Motors. The company plans to produce floating replicas of the iconic vintage small cars under this brand name – including the Fiat 500. It is called La Dolce and can accelerate up to 64 km/h on water.

To make the boat look like its four-wheeled prototype, it was equipped with headlights, A-pillars with a windshield, a similar body and even a vintage bumper. The 3.5-meter catamaran weighs 550 kilograms and is capable of accommodating four passengers. The front ones are placed on separate seats, for the rear ones there is a solid bench.

Floating Motors La Dolce will be available in two versions. The first is equipped with a traditional Mercury MerCruiser outboard engine, which develops 70 hp with a displacement of about a liter. With this engine, the catamaran will accelerate up to 35 knots (64 km/h). This version costs $30,000.

The second version will be equipped with a Torqeedo electric motor. It is weaker by 10 hp, and the maximum speed is reduced to 47 km/h. Nevertheless, an electric catamaran costs almost twice the price of the first variant – $50,000.

Placing an order for the catamaran will require a deposit of 5 thousand dollars, and the construction itself will take at least eight months. 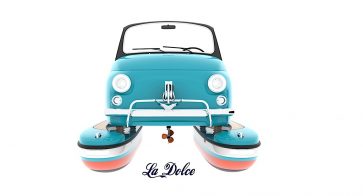 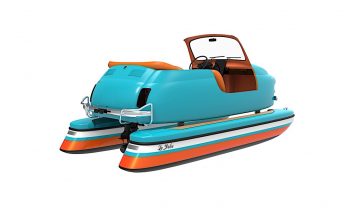