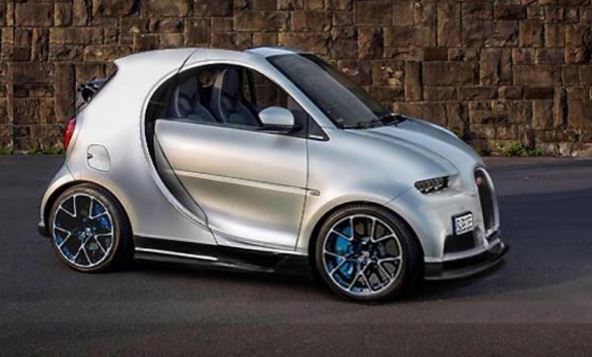 Home » Articles » This is the cutest Bugatti Chiron you’ve ever seen. Just a render

Bugatti Chiron City Car RenderFortunately, the four-wheeled creature you can find here is a rendering, one that shows what would happen in a Chiron and a smart fortwo Cabrio had one too many glasses of E85 and spent the night together in a cramped garage.

Since certain Chiron owners would love the charms of a Bugatti open-air model now that deliveries have kicked off and the weather is just right, you could say this oddity would solve an important problem.

And we have to admit one thing: the mix between the C shape coming from the side of the 1,500 hp machine and the Tridion cell of the urban dweller actually looks cute.

Then again, the birth of such a machine, even as a one-off project coming from a wacky garage out there, would generate quite a lot of other issues, so we’re glad this is nothing more but pixel play.

And speaking of potential insane builds, given the proportions of the fortwo, even a tenth of the hypercar’s power would be too much for the city car.

After all, we wouldn’t want to get the same unpleasant feeling we experienced back in the days when Aston Martin wanted us to believe its reskinned Toyota iQ was a proposal worthy of the badge.