Concordia, the manufacturer of electric vehicles from Dmitrov, Russia, presented a prototype of a multifunction municipal vehicle called Apis (from Latin – a bee). This is the first domestic utility electric vehicle ready for mass production.

The Apis is besed on the Concordia Urbis small EV borrowed a space frame, steering, brakes and independent suspensions. Since Apis, unlike Urbis, is an all-wheel drive vehicle, the engine was transferred to the base and equipped with the simplest transfer case: a gearbox, a differential, two angular gears.

An electric car with a full differential drive is unusual in itself (the solution is quite expensive), but they also made a power take-off to the rear mounted units. The rotation speed of the power take-off shaft is 500-600 revolutions, depending on the speed of movement, this corresponds to the needs of most of units such as brushes, gritters, mowers. The overall reduction ratio (a set of lowering rows) is 1:32. With such traction equipment, the car accelerates to a maximum of 40 km/h, which is pretty good for municipal vehicles.

The engine is asynchronous, 10-kilowatt, made in China. The traction batteries are also from China (lead on this instance, but there will also be lithium-iron-phosphate ones), for 160 Ah and a voltage of 72 volts.

Concordia has been experimenting with Russian-made electronics from Adapta for a long time, but in this vehicle the controller is imported – it is still cheaper and more reliable. Apis is charged from a conventional 220-volt household network for eight hours, the mileage on a full charge is 60 km. With an iron-phosphate battery, the mileage will be increased to 100 km.

The body of the car is made in the brutally angular style of Tesla Cybertruck. The cabin is simple, almost unfinished, but all the plastic elements in it are original, made by Concordia. A 300-liter water tank was placed in the rear insulated compartment. Through special lines, water through a pump (pressure – 2 atmospheres) goes to the rear equipment to wet the brush or wash the roads. The water consumption is small, the tank is enough for an hour and a half of work.

A simple and elegant solution is used to raise the rear “hinge” – a mechanical winch. Of course, a hydraulically driven mechanism would be more efficient, but it is energy intensive, which is unacceptable for an electric car. They were also guided by this, making the power take-off purely mechanical, without an intermediate hydraulic station.

They plan to sell the Apis for 3.5 million rubles (~$65,000) with attachments. The base cost of the machine itself is 2.5 million (~$45,000). This is more or less the average price for small utility vehicles. The main buyers are supposed to be holiday homes, large hotels, golf clubs, etc. 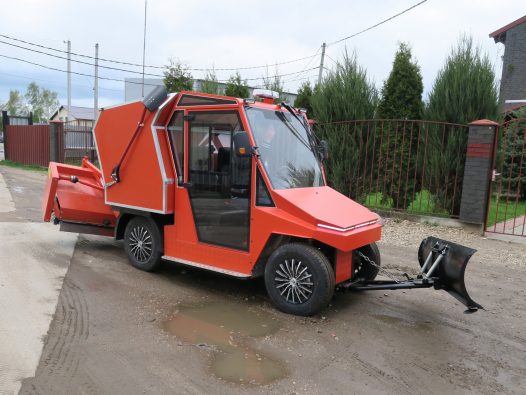 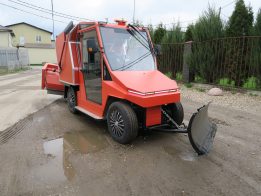 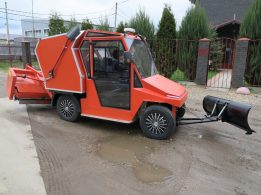 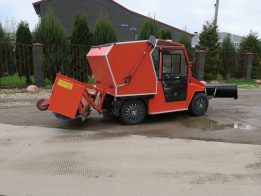 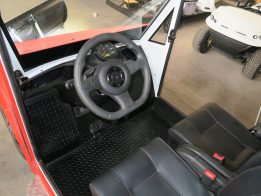 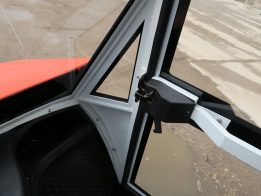 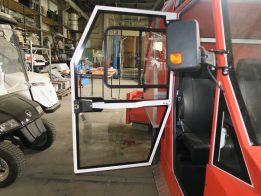 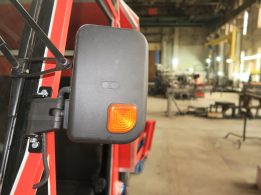 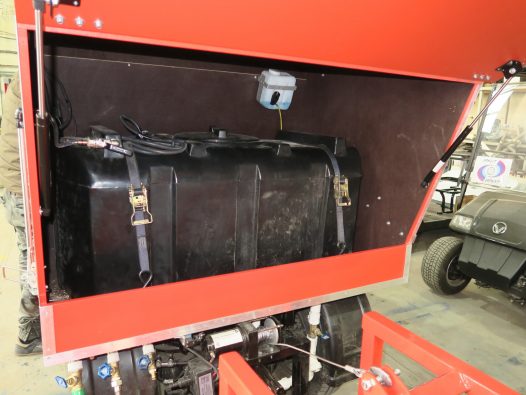 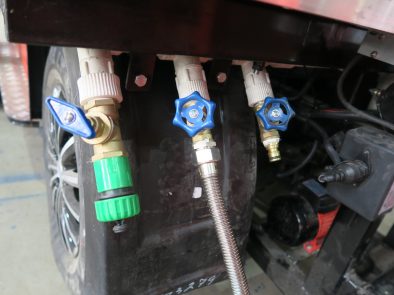 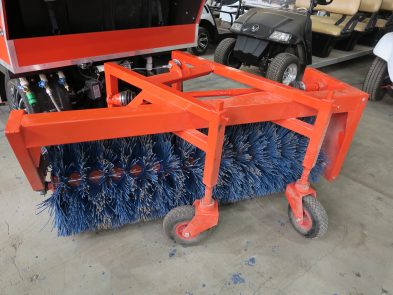